Your Pull Request Sucks (or Does It?)

One of the things that slows me down the most as a developer is getting roadblocked on a pull request. I can spend a frivolous amount of time, say 15 minutes, actually producing and testing my changes and then on rare occasion be stuck waiting hours or days for it to be reviewed.

There’s only so much you can do to alter another person’s availability to review your code, but what hit me over time is that other developers are like me: they switch contexts just as much as they switch git branches. People need context! Unfortunately, reading a diff is not a fantastic way to establish context and can take just as much time as it takes to review the PR itself. And not having context can cause people to procrastinate or simply forget to review your pull request until you bug them to do so.

I have always written pull requests like any other developer might. I explained what the changes were, relative to nothing else. The title of the pull request would be well-written and explain the ultimate goal of the changes made and because of that, I assumed that the changes would be implicitly understood by the reviewer.

Alas, other developers do not necessarily work on the same area of the application as I do. Or have not recently worked on it. Or may misunderstand the human factor of what the changes are trying to achieve. As someone who has been looking at the code for maybe days, I want to say, “That’s so obvious, do I really need to explain it?”

The answer to that is: “Maybe not, but what does it hurt to do so?” Who knows, maybe in 2 weeks, you’ll need to revisit this pull request. Maybe in 2 months a bug will be discovered that is the result of your changes and other people will get involved. Either way, there is no harm in transparency.

I’ll use examples of pull requests I have done to break down some ideas on what makes for bad, okay, and good pull requests. I feel no shame in this because I’ve learned from it! I work with several people who have produced awesome pull requests that were constructed in ways I found impressive, but putting other people’s work on display is weird and not cool, so this is sticking strictly to stuff I’ve done to highlight things.

Prior to working at Treehouse, I used a system called Phabricator at DeviantArt. It was originally an internal product made by Facebook and had a project management tool for doing code reviews called Differential. It was sort of similar in concept to a Github pull request, but different enough that I was pretty far removed from the concept of any kind of engineering culture behind pull requests. So when I waltzed into my job at Treehouse and started slopping together pull requests in Github for the first time, it was a hot mess, as you can see here:

Here’s why it sucks:

Reviewing a pull request should not make someone feel like they are solving a dramatic mystery.

Eventually, I started to figure out that not taking the time to write out a meaningful message to go along with my pull request added significant traction and pushback on getting it merged. As it turns out, even within your organization, people expect you to have good communication skills to help ease them into things you're working on. So I started including a basic backstory to the code I was trying to merge: 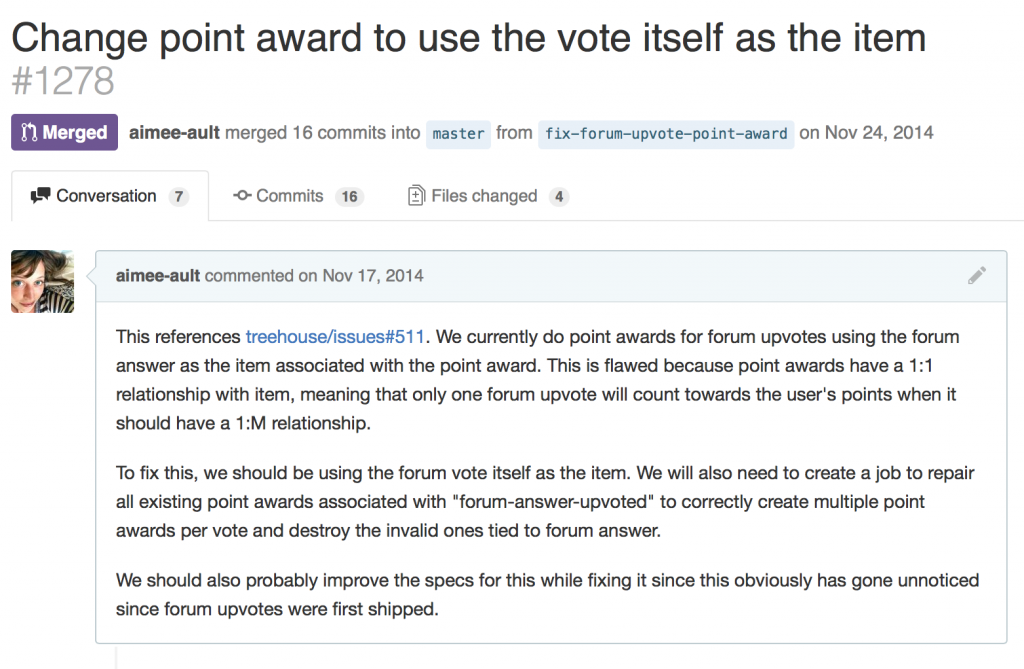 Here’s why it’s okay (but not necessarily good):

Here’s why it’s not good:

A pull request should direct people to the appropriate parts of the application that are touched without confusion or having to ask for more information.

This is where things start to get more subjective. I’m using an example of a very large pull request I worked on a few months ago for this, in which I was maybe overly cautious about, but I think some the ideas surrounding it can be applicable to smaller pull requests as well. Is this pull request the best pull request in the history of the world? No, of course not. In fact, a few small-ish bugs emerged from it despite having a fair amount of clarity. The point is that it minimizes confusion about the intent of the pull request. 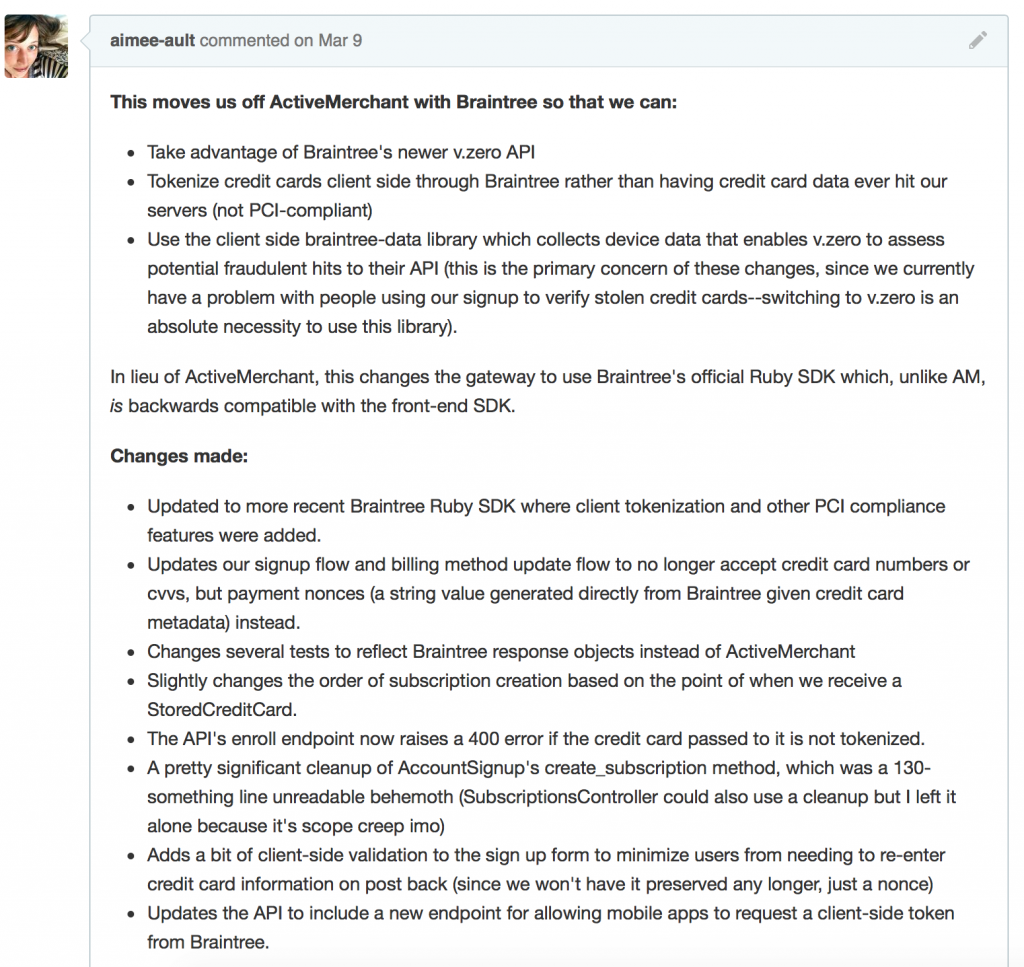 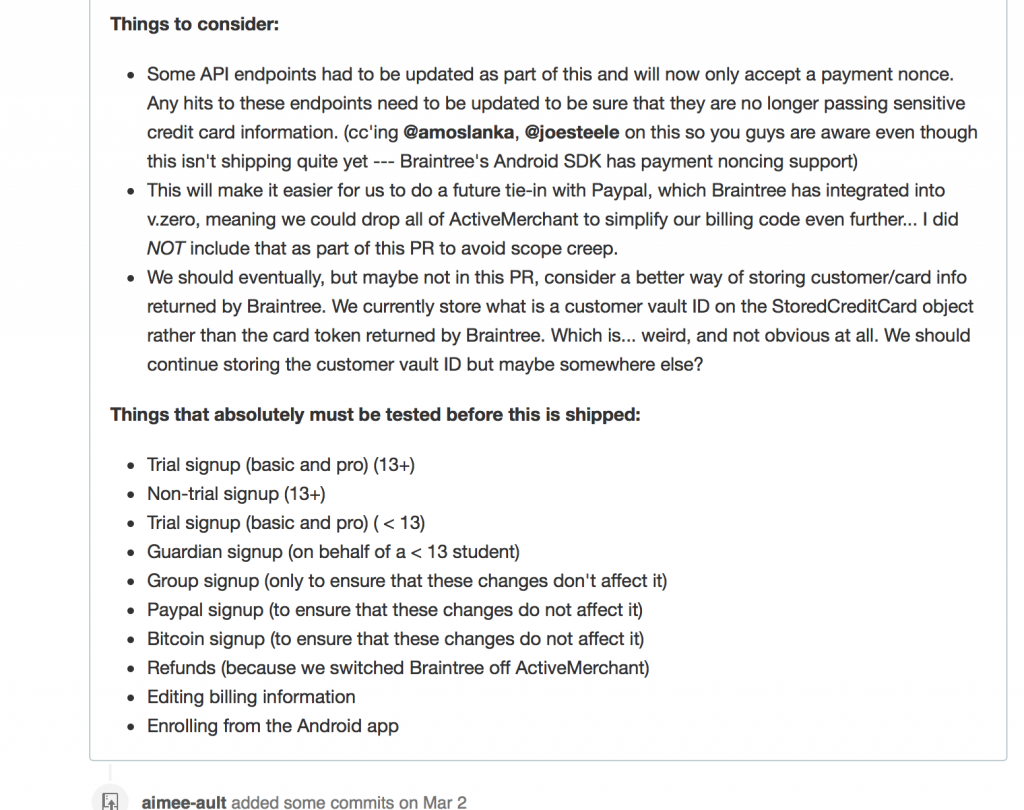 Ways it could be better:

One other thing that I like to do inside of pull requests is to spearhead conversations by making my own inline notes on code before the reviewer has the chance to do so, pointing out any areas that I am uncertain about that I am looking for suggestions on, adding additional clarity on why a particular line was changed if I think there may be even the slightest bit of confusion. That way the conversation in the pull request is bi-directional.

I like to think of writing pull requests like hosting an out-of-town guest. We have things in common, we speak the same language, we both have the same understanding of how human life works (we both know to breathe air and walk and other human things), but they don’t know all the intricacies of my town even if it might encompass some of the same things they’re familiar with from their own town or travels elsewhere. I talk like I assume they know some things but I’m not going to just jump in and say, “How about that Timbers game last week?” because I know they’ll have no idea of what I’m talking about–they are foreign to my town and they are potentially foreign to this code as well!

It’s common as a developer to think about learning from other developers from a strictly technical perspective: “Bob has more experience with this system than I do and can share information with me about it” or “Lisa is really good with CoffeeScript and might know of something that works better here…” but on a daily basis, every time you are interacting with other developers, you are subconsciously learning something about communication by trial and error. Any time you walk into a dead end with someone through miscommunication or find that something is useful to another person, that’s noteworthy and should impact how you verbalize things in the future! Don’t make people’s brains explode.